Nothing pithy or even interesting to say today. Just that I wish I had a house like this on the beach. And that my skin were this pretty. Curly hair fascinates me. I had a roommate with super-curly hair once and I could spend hours sitting there pulling the strands of her curls straight, letting them go and watching them spring back into the curly shape. Needless to say she was a very patient and forbearing friend! My own hair in RL is somewhere between straight and curly, but with no uniformity, so instead of nice volume I get either a limp mess or a rats’ nest. Just another reason to be grateful for SL hair! And for this style in particular, from Sebastien Aries at Shag. Also new to love today is the brand new Kim set from Endra Graves at Artistry by E. My sexy henna art-tattoos are courtesy of Guenever DeCuir at Collisions. Jewelry: Artistry by E, The Kim Set by Endra Graves

On blogger preview day for Fashion for Life I ran into Ava Kungler setting up her space, and she was wearing this dress. I was like “WHERE can I get THAT!!” Well it was released a few days ago so not only I but all of you can also get this beauty. My favorite is this orange, black and green pattern, but there are a few other color combinations as well. Hair: [Shag] – Thai Me Up – shadow by Sebastien Aries

My first dog was a small, part Maltese mix named Katie. She was a decent dog, as far as family dogs go, but she was a yapper, and an uncontrollable one at that. She was not an attack dog, but she did love to bark. I have very fond memories of my Katie, but I did learn that a small, yapping dog was not the way I wanted to go in the future. I have always been a big dog kind of girl—the hounds, the working dogs—dogs with a purpose, I call them. Even though my own beautiful Luna does not pull carts or herd sheep like she was bred to do, she does keep watch on the house and deter anyone from approaching me on the street by looking big and scary. 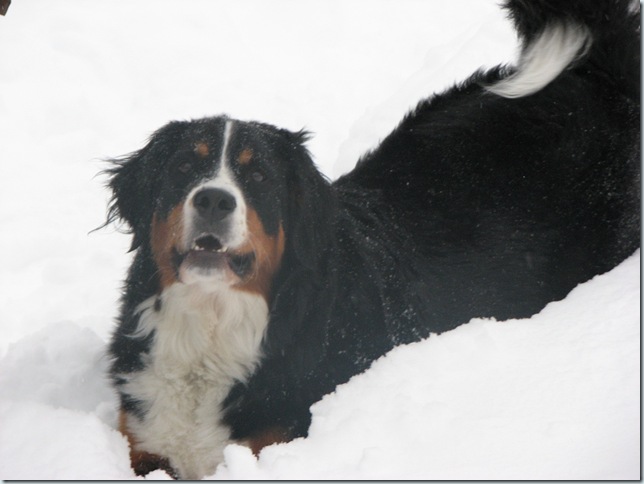 Sadly, no one has made a Bernese Mountain Dog in SL yet—a huge omission if I do say so myself. However, that does not meant that the big dogs get no love: Carrie Tatsu has created some of the most realistic-looking animals I have seen in SL. Animals are notoriously hard to create in SL—something about all those folding joints, I guess. But this big boy (named Con after one of my favorite vampire novel characters) looks realer than I do, right down to that very curious-canine expression in his eyes. Usually Great Danes aren’t quite so big, but my avatar is only 5’8” in SL, which is apparently midget-sized. But in any case, curling up with a big dog is way more satisfying than with a little one, so if you have your own big goof of a dog, show them some love today. A dog like Con requires some no nonsense shoes (mostly for chasing) and I am wearing the comfy mesh Uggs from Guu Nishi at Hoc Industries today. Also, Maxi Gossamer has just released a new necklace called Babette, and while there is a very high likelihood that it will get caught on Con’s ears (or in his mouth), I couldn’t resist putting it on today.

**Con does all sorts of doggy things in addition to looking adorable, which you can read about here.

Disco Deals has some great items out this round, and one of them is the lovely  mesh Fleur dress, Willow Caldera’s premiere creation. This is a lovely dress and I plan on wearing it very often. The one thing I will mention is that the alpha doesn’t cover the entire chest area and my skin showed through even with the largest size. There’s an easy fix, though. I used an alpha layer designed for a tube top here and voila! Perfect. Another Disco Deals item is the Les Etoiles Brillent set from Dark Mouse. This set is so pretty and delicate and is available in gold, silver and copper options. Hair: [Shag] – He Loves Me Knot – espresso by Sebastien Aries

The new pose set from !Bang is appropriately named for so many things I am wearing today…first my exquisite gown from Meiling. It’s one to make you want to swish around a ballroom or if no ballroom is available, to jump in a fountain and dance around! To set off my lovely frock I chose another great mesh necklace from Maxi Gossamer and gorgeous hoop earrings from U&R Dogs that use up every millimeter of cartilege space on my ears. Necklace: Key to my heart necklace-black by Maxi Gossamer

There is so much great stuff coming out in SL right now that it is hard to keep up and blog everything I want to. Add to that the fact that I am still pretty new at this, and have a hard time making things look the way I want them too without a LOT of time and work. Yeah, not so much a great talent, here. But anyway, as I was looking through some group offerings I found this dress from Paris Metro. I always love the concept art on these gowns and this one is no exception—the gown is called Salsa, but it really makes me feel like a flamenco dancer. A bold dress needs bold accessories and I found them in this beautiful set from Dark Mouse. One thing I always appreciate about Mouse’s work is that there is always so much to look at—there’s nothing simple about this set. The guitar is playing and my feet are stomping of their own accord, so see you later!

I actually really like this color—I thought it would be harder to come up with something but as it happens both Gypsy and I found items right away that we wanted to blog.

I did try to find an animation for the Electric Slide (I know that totally gives away my age but oh well), but there was none to be found, so we went with some cute friends poses from the great Katey Coppola.