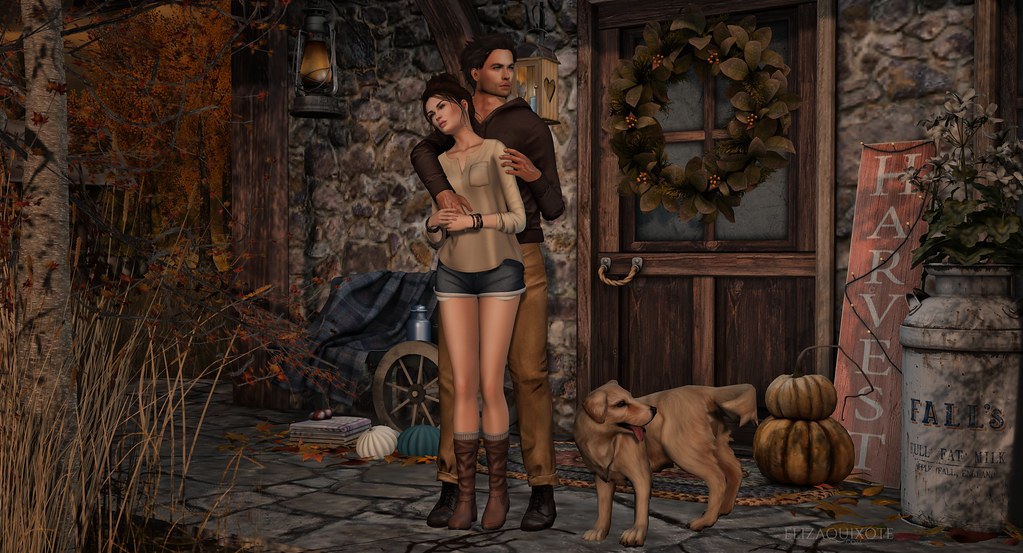 So many skins, so little time!

Nicole Button has released two skins for the Skin Fair this year…today I am wearing Anjali. This is a more mature skin than I have worn lately, but I love the bone structure of this one. I went through a period in SL where I wore nothing but Apple May skins. They are so soft and sweet…they are still a favorite, and this year’s Skin Fair release, Suki, is no exception. I am not generally a fan of super young skins, middle-aged woman that I am, but Aida Ewing’s fresh-faced and glossy-lipped Romy is well worth a return to teenager-hood, as long as I don’t have to stay there! PHOTOSHOP details: The hair in these photos was processed with Photoshop. The skins are untouched with the exception of some shadow removal.

Let me go to the window,

Watch there the day-shapes of dusk

And wait and know the coming

Of a little love. Scarf: Apple May Bundle Scarf- Holiday (Brown) by Apple May

Many of my students aregetting responses from universities right now, and some of the news is very, very good. That inspired me for today’s post. One thought on “Good News”

This sparkly gold dress from Vero Modero only works for a girl living in the city—anywhere else and she would either cut her legs to shreds or attract every insect in 30 miles. But it does look good walking down a city street. As does Catwa Clip’s newest beehive-inspired updo. Ships that pass in the night, and speak each other in passing,
Only a signal shown and a distant voice in the darkness;
So on the ocean of life we pass and speak one another,
Only a look and a voice, then darkness again and a silence. I’ve always liked the dark, dreamy feel of Longfellow’s verses and the wistfulness they evoke. Newport Bay has some of that feeling, so I decided to take my pictures there today. My dress, a new mesh creation from Apple May, is soft and comfortable. I am looking forward to see what else she comes up with. This week I was totally uninspired. Not an auspicious beginning! Maybe it’s the January blues. Anyway, all I really wanted to do was wear this dress so that is what I did. Better luck next week! Skin: Apple May Designs Eliza Carmel by Apple May

Today one of my colleagues was telling me about her twenty-year old cat who is on her last legs. As cats go, she is a beautiful one, and the sweetest love I ever met. Sadly I am allergic to cats and have to admit to being a dog person, but if I could have cats, I would have loved to have  a girl like Sugar. So today’s post is for her–may you chase many mice in the great hereafter, dear.

My outfit today covers me completely—allergens, I am on to you! My sweater is from Inge Rang for Crank Design and it’s on sale at the Designer Circle through tomorrow, so grab it while you can! Milly is one of the newer skins by Apple May—a lovely creation with it’s delicate and pixie-like face. Skin: Apple May Designs Milly – Carmel by Appel May

Today I made the very big mistake of thinking that today was going to be like every other day weather-wise that we have had lately; namely forty-degree weather even though it is January. It would appear that Mother Nature finally woke up from her nap and realized she had been quite remiss with regards to her winter weather! I walked out the door in my jacket and my hair (which was still partially wet because yeah, I’m just super chic like that) immediately froze. So I had a choice, run back inside and get a coat, or run for the car. I chose the latter. This seemed like a good idea until I got to work and had to walk a quarter mile down the street to my school. Let’s just say lessons learned.

So my girl today is similarly inappropriately dressed, in low-rise leather pants and a wispy short-sleeved thing from League. My only nod to practicality are my boots from J’s and my arm warmers—and even they are too lacy for much protection. But they are so cute! And I had been waiting for a chance to wear this great feather necklace from Graffitiwear. I am really enjoying trying out the different mesh hairstyles that are increasingly available—this one is from Wasabi Pills and you can see that my av managed to get her hair dry before leaving the house! One of the sweetest people I have met in SL is Caroline. I’ve known her since my earliest days in SL and have wanted to do a shoot with her for some time. Now, not everyone wants to have their picture taken—I know because I’ve asked! However, Caroline readily agreed and turned out to be a natural, so you’ll probably see more of her! One thing I admire about this talented lady is her ability to rock the blonde look. Being a resigned brunette myself, no one appreciates this more than I do. And when I saw this cute pink winter outfit from Cameron Vasiliov, I knew it would be a perfect fit: We had some fun trying to catch snowflakes courtesy of a new pose set from Juxtapose. 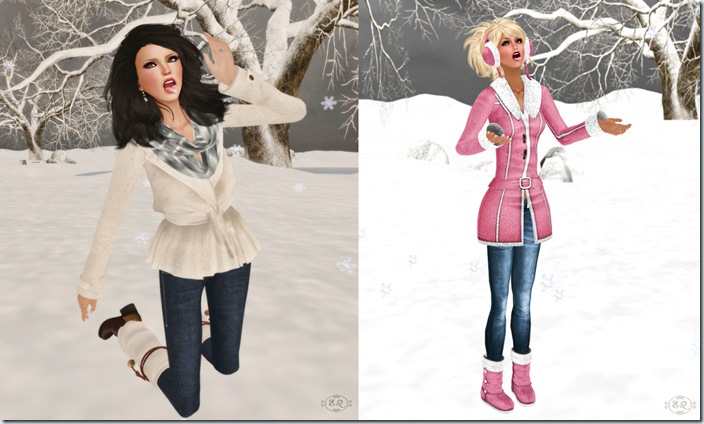 One other relatively recent release is a new tattoo layer set from Izzie Button, who most graciously allowed us to temp-rez at her store so we could do the photo shoot. My cold-flushed cheeks are due to her amazing ability to create facial color variations. Thanks, Izzie! Skin: Apple May Designs Eliza Tan by Apple May